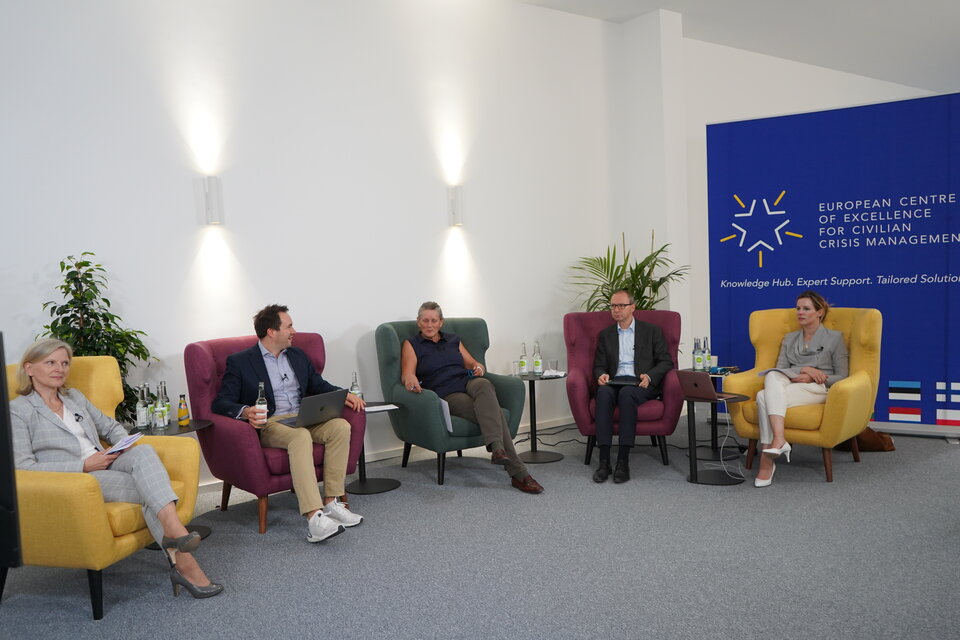 How to detect and break the existing barriers that hinder women from applying, being selected and deployed to EU civilian crisis management missions? How to ensure that a mission provides an inclusive and enabling work environment where everyone’s potential is recognised regardless of their gender, and harassment is not tolerated? And what is, to this end, the role of the leadership?

These were some of the questions tackled by a group of practitioners, policymakers, researchers and other experts in gender, human resources, management and training in civilian CSDP, brought together by the  European Centre of Excellence for Civilian Crisis Management (CoE)  for a virtual workshop on How to Increase Women’s participation in Civilian Crisis Management Missions. The workshop took place on 16 September 2020 and was moderated by Dr Florence Gaub, Deputy Director of the European Union Institute for Security Studies (EUISS).

“Gender equality for men and women should be achieved by men and women together. [For that] we need gender responsive leadership”, Ambassador Mara Marinaki, Principal Advisor for Gender Issues and UNSCR 1325 at the European External Action Service said.

This statement by Ambassador Marinaki summarises one key aspect participants of the workshop highlighted: The lack of gender balance in Civilian CSDP missions is an institutional challenge, a true “gender issue”, not exclusively a women’s issue.

The continuing importance of UN SCR 1325 (2000) was stressed by all key speakers of the workshop: Cristina Gallach Figueras (Secretary of State for Foreign Affairs and for Ibero-America and the Caribbean of Spain), Joanneke Balfoort (Director Security and Defence policy at the European External Action Service) and Birgit Loeser (Deputy Civilian Operations Commander and Chief of Staff and the European External Action Service Civilian Planning and Conduct Capability).

You can take a look at some of the highlights of their interventions in the video below.

“Make gender mainstreaming and representation of women a core aspect of how to set up Civilian CSDP missions”, said Hannah Neumann, MEP and Peace and Human Rights Coordinator for the Greens/EFA Group, Vice-Chair of the Human Rights Committee, Member of the committees on Foreign Affairs and Security and Defence Policy, as well as Chair of the Delegation for Relations to the Arabian Peninsula.

Other keynote panellists at the workshop were, the above mentioned Member of the European Parliament HannahNeumann, Callum Watson (Project Coordinator of Gender and Security Division at the Geneva Centre for Security Sector Governance), Lina Andéer (Adviser on Gender and Women Peace and Security to the Civilian Operations Commander at the European External Action Service Civilian Planning and Conduct Capability) and Katja Dominik (Deputy Head of Mission of the EU Coordinating Office for Palestinian Police Support EUPOL COPPS).

Take a look at the highlights of their interventions in the video below.

It was repeatedly noted during the workshop that 1,5 years into the implementation of the Civilian CSDP Compact, there has been an increase in the number of seconded staff , but not in the number of women. International seconded and contracted women represent currently about 24% of mission staff.

Worth mentioning on the positive side though is that on 13 October 2020, Nataliya Apostolova was appointed Head of Mission of EUPOL COPPS. However, this makes for only one female Head of Mission – dramatically worse if compared with the situation back in 2015, when half of the missions were led by women.

Other topics discussed were the importance of a holistic and multi-dimensional approach and a strategy to mainstream gender equality, the impact of mandates of missions on the level of representation of women, the importance of creating an enabling work- and living-environment as well as a gender-responsive leadership.

The main take-aways of the workshop were recommendations, some of which are listed below:

For the full list of recommendations, read the full report of the Workshop.

At the official opening of the CoE at the German Federal Foreign Office, a panel moderated by Florence Gaub (EUISS) consisting of Johanna Sumuvuori (State Secretary to the Minister for Foreign Affairs of Finland), Cristina Gallach Figueras (Secretary of State for Foreign Affairs of Spain), Daniela de Ridder (Member of the German Bundestag) and Katja Dominik (Deputy Head EUPOL COPPS) reviewed the main topics discussed during the workshop.