Opening of the European Centre of Excellence for Civilian Crisis Management

The European Centre of Excellence for Civilian Crisis Management (CoE) opens its doors on 17 September in Berlin. International partners will work together to defuse conflicts through civilian means. 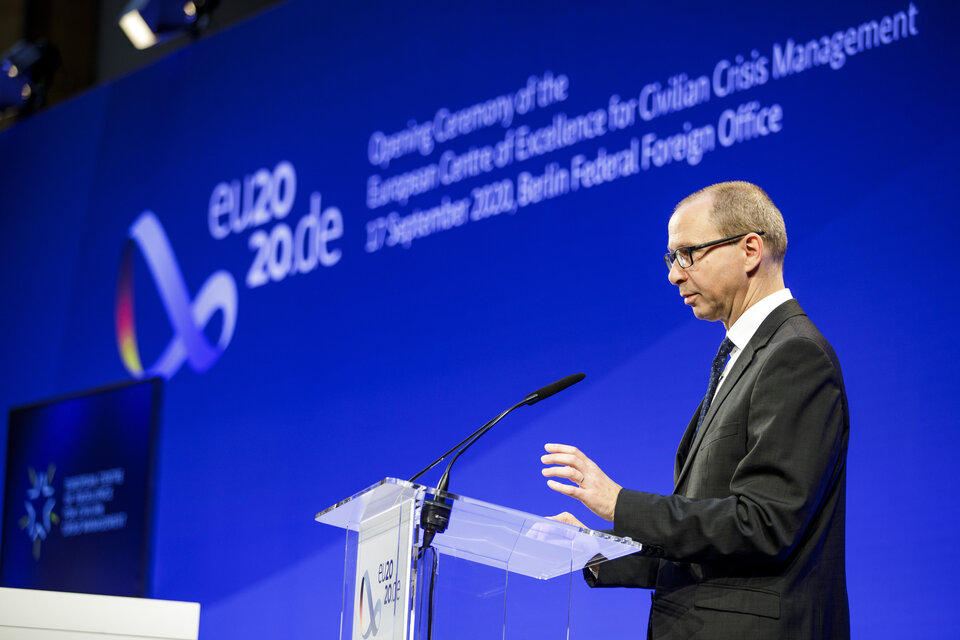 The CoE is an international non-profit association based in Berlin comprising of 18 European Union Member States. The Centre of Excellence was established in February 2020 following an invitation to all EU member states by the German Federal Government.

"All crises in our neighbourhood have one thing in common: lasting solutions cannot be found through military means alone. Europe must become stronger in the sphere of civilian crisis management, as the centrepiece of the Common Security and Defence Policy.

To this end, the European Centre of Excellence we are creating in Berlin will be a flagship as well as a “do-tank”. Together with our EU and NATO partners, we want to pool our know-how on how conflicts can be defused through civilian means.

The European Centre of Excellence for Civilian Crisis Management is a house in Berlin with a European nameplate: 18 EU states have already become members and will contribute their expertise. And this centre is also open to NATO Allies."

Founding Director of the CoE Volker Jacoby stated on the occasion of the opening of the Centre:

"Civilian crisis management is at the very heart of European foreign and security policy. With the adoption of the Civilian CSDP Compact in 2018, civilian approaches to managing crises have gained momentum. The establishment of the European Centre of Excellence for Civilian Crisis Management is therefore logical and could not be more timely."

The work of the CoE will initially focus on

1. improving cooperation between civilian CSDP and Justice and Home Affairs;

2. advising members on how to increase the number of seconded personnel – and particularly women - in EU Missions;

3. assisting members in ensuring the preparation of staff for their important work in CSDP missions.

“Civilian crisis management is at the very heart of European foreign and security policy. With the adoption of the Civilian CSDP Compact in 2018, civilian approaches to managing crises have gained momentum. The establishment of the European Centre of Excellence for Civilian Crisis Management is therefore logical and could not be more timely.“

The Centre of Excellence will gather, analyse and share national good practices in the field of civilian crisis management. Based on this knowledge, the CoE will provide tailored solutions and expert advice to member states, EU Institutions – especially the EU External Action Service – and to EU missions. This will also be done in coordination and complementarity with privileged partners such as NATO.

The panel speakers at the opening event of the CoE will also take stock of a hybrid workshop organised by the CoE on 16 September 2020. The subject matter of the workshop was How to increase women´s participation in civilian crisis management missions.

Johanna Sumuvuori, State Secretary to the Minister for Foreign Affairs of Finland stated that

"Finland is fully committed to strengthening the EU's capacity in Civilian Crisis Management. We trust the new Centre of Excellence will help the EU and its member states to achieve this goal. We also want to advance the role of women in crisis management to enhance the overall effectiveness of the EU's CSDP missions."

Cristina Gallach Figueras, Secretary of State for Foreign Affairs of Spain for Ibero-America and the Caribbean underlined that

"Promoting more women in civilian missions at all levels and in a meaningful manner must be a top priority for all of us. Missions will not only be more credible but also a more effective instrument of our Common and Security Defence Policy abroad."