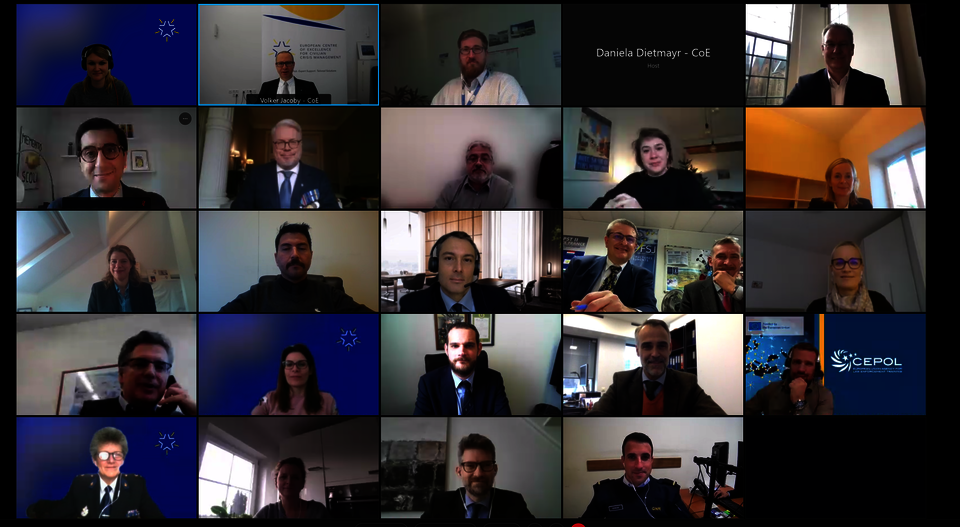 Making civilian CSDP more joined up is one of the core commitments of the Civilian CSDP Compact to strengthen European civilian crisis management. The CoE seeks to contribute to the strengthening of cooperation between civilian CSDP and Justice and Home Affairs (JHA). To this end, it is conducting a series of three workshops.

The second workshop on Strengthening CSDP-JHA Cooperation: ‘Harmonising Narratives to Bolster Cooperation’, organised in coordination with the Netherlands and Portugal as Chairs of working groups (so called informal clusters) of EU Member States, took place on 6 December 2021. 66 participants from 23 Member States, as well as JHA actors, EU institutions and other stakeholders exchanged their views on CSDP-JHA cooperation and discussed the key takeaways from the first CoE workshop, where cooperation within Member States was central.

Throughout the workshop, it became evident that the national prioritisation and the objectives to be achieved through cooperation between CSDP and JHA should be incorporated into the decision-making process at the institution level, considering that the aspiration to build a real EU security system has become more opportune nowadays, following the adoption of the EU Security Union Strategy for the period 2020 to 2025.